Citizens United for the Rehabilitation of Errants – Nevada Chapter

The original of this letter is at the archives of Nevada-Cure.

Thank you for writing me back. I received your letter on August 30, but am only now getting a chance to answer it. I have been going through so much in here for about a month because these so-called correctional officers have been denying me my meals and not only me but a couple of other inmates as well, and that senior co in the bubble name Jesse Cox has been throwing away my fellow prisoners’ mail retaliating against us because of grievances and anything that we do or say. So me and several other prisoners had to do what we did to get the warden’s attention.

It’s obvious they don’t understand nonviolent protest because every time we get together and write a grievance these c.o. continue to do what they want to do “illegally” so we have to do what we have to do in a violent way to get these people to understand us. We are not animals, we are human beings that are locked down 23 hours a day in a maximum security prison in the middle of nowhere, a lot of us don’t have any family to help us (I know I don’t) and it’s hard to get people to hear our voice because the “C.O.” throw away our phone kites.

Just a few weeks ago I was removed from 4A to 4B after talking to the “caseworker” about what was going on and its like they don’t even care because after I told the caseworker what happened and why I was acting the way I was acting, they moved me to the other side (4B) with a bunch of really really mentally ill people who scream and bang on their door all day. Not only that, when they moved me into the cell, it was not clean at all. My water was turned off, my toilet was turned off and the guy who was in there before me left feces and urine in the toilet and I couldn’t flush the toilet because the co turned it off. I asked if they can turn it on so that I can flush it and the only answer I get is whistles and “chain chain chain, chain the fool” song that the c.o.  sings to me just to provoke me. It keeps going and going.

That same day they refused to give me my dinner. I did nothing during chow time and they passed right by my door without even looking at me. So I flooded my room, tired of all the foul treatment, the cruel and unusual punishment, my lonely life without any help and everything else. Pencil in my hand I tell the Sgt. to go get the Cert team, come in my room and get me, I’m not cuffing up. You come in here and I’ll stab all of you. That day I was ready to die or get beat down by seven officers but it didn’t happen. They kept me in there all night until about 10 am the next morning. I was able to calm down and the warden came to talk to me. I told what happened. She acts like she cares but I know she doesn’t care at all. So I cuff up, get on my knees so that they can put the shackles on my ankles. The c.o. made a slick comment and I turned around to look him in the eyes and tell him to shut up and boom! I’m knocked to the ground with a closed fist by the officer. This isn’t the first time, so it didn’t shock me. One of the officers named Coleman that also had fun assaulting me while yelling, Stop resisting! Thrust his two fingers to the side of my neck going for my pressure point. I laughed at him because he wasn’t doing a good job at what he was doing, my body was supposed t shut down when he did that even though I was on the ground already, but it didn’t. The AWO was there, he seen what happened, why it happened, but he didn’t see it all (I wonder why?)

Well, I’m sorry for taking up your time with all this and not responding to your last letter. I will respond to your last letter, but let me tell you more. After that happened with the officers I was sent to the infirmary with no shirt, no socks, no shoes, put in a cell naked with a suicide blanket until I was seen by “mental health”. I was seen and cleared to go back to the hole. I was doing alright until one morning I was up ready to go outside so that I can get some fresh air and run a couple laps, a c.o. that did not like me told me that I couldn’t go to yard so I captured the food flap so that the Sgt. could come talk to me, he did and he said it was all a misunderstanding and I could have my yard time if only I would comply with their orders. I did. I got my recreation time and came back to my cell without any incident at all.

So I’m sitting in my cell reading a book by Chairman Mao Tse-Tung and here comes the mental health lady telling me she’s taking my yard and my phone. I didn’t care about the phone because I didn’t have anyone to call anyway and still don’t. So I ask how long are you going to take my yard time and she said, “As long as I want to.” I told her she couldn’t do that because I didn’t do anything and she walked away, so I flooded my room to get the sgt. or warden’s attention but to no avail. The C.E.R.T team comes and tells me they are going to clean out my cell and search it. They did and they also took me to another cell and strapped me down to a bed naked in a camera room and while they were strapping me down I told the CERT officer that I can finally look him in the eyes. He pulled my hair, pulled it so hard that my head lifted and turned my head the other way, pushed it down on the bed. A week later I got strapped down again for talking to another prisoner down the way from where I was and then they moved me to another cell and refused to let me shower and have a towel. So I flooded again. Nothing happened that night. The next morning mental health lady comes to my door and tells me that they are going to be taking my mattress every morning from 6 am to 6 pm. I told her no, you’re not. They took it from me and I slept on the cold dirty nasty stinking bug infested floor all night. They did not give it back to me at all. I was cold, without clothes, just a suicide blanket, naked sleeping on the floor. Did I write a grievance? No. Why? Because all I’m going to get is grievance denied, grievance denied, and grievance denied. I tell you this because nobody else listens to me at all. I hope that you understand the life I live in prison.

Well, as you probably already know, I will not be able to get a job here at Ely because of all the things I’ve been doing (It’s not my fault). They’re violating my rights; they’ve been doing it for the longest now. But there’s nothing I can do because I don’t have any help in here or out there. I hope that you can help me or get the IG or AG to talk to me because if this continues I don’t think I’m going to make it out of prison, and in my mind I don’t even think that I am going to get out of prison and I’m not even a lifer.

Now, on the lawsuit that I want to file is for something that happened down in High Desert. I did not want to shower in my room because it was dirty so the officer took me to the other shower up front in the infirmary to the shower. I started yelling and screaming, that’s all, and the officer opened the shower gate, snatched me out and slammed me on my face, punched me in the left side of my face, then my nose, causing it to bleed and then he put a pillow case over my head. I couldn’t see or breathe and I was down after that. I was scared, terrified and paranoid because of the cruel and unusual punishment and the excessive force that was used on me. (Like always). If you would like for me to send you a copy of my notice of charges I will do that because the c.o. even says that he hit me in the face and put a pillowcase over my head. It says that in my write up that he wrote (which I know is enough for a law suit).

Well, thank you for your time…

Welcome! Please join our cause. Working together we can make constructive changes to the systems.

We work with prisoners, their families, their friends and prisoner rights supporters to change the Nevada prison and parole systems. We are family, friends of Nevada prisoners, and former prisoners. We need your help.

Working together, instead of at cross purposes, we can change the way our government treats our errants. Please join our cause. Working together we can make constructive changes to the systems.

You can become a member of Nevada Cure for $10 a year.
Incarcerated people pay $2 annually.
For this you receive our quarterly Informational Bulletin, you help Nevada Cure  fight together with prisoners for better conditions inside, and ultimately to vastly decrease the number of people going to prison.
Send us an email via nevadacure[at]gmail.com if you want to become a Member.

We have a monthly meeting that is also accessible via phone.

Send your name and address, email and payment to:

We also have Paypal, where you can donate (Nevadacure@gmail.com) 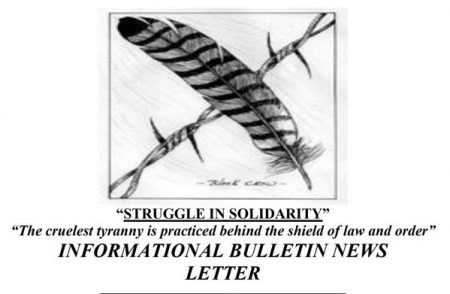 You are welcome to call in:

Our Meetingroom is hosted by:

How you can help Nevada Cure

Reports and Lawsuits about Prisoners and Prison Conditions